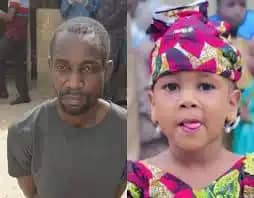 Kano state government has assured commitment to accomplish all legal proceedings on the conviction of Abdulmalik Tanko and Hashimu Isiyaku, killers of Hanifa Abubakar and then sign his Death Warrant.

Justice Usman Na’aba of Kano state high court recently found the prime suspect and accomplice guilty of Kidnapping the six years old pupil, and sentenced both to death by hanging.

Besides, the court convicted  Abddulmalik and Hashimu to five years jail term for guilty of other three charges in the counts. However, the third defendant, Fatima Musa was sentenced to two years imprisonment for guilty of criminal conspiracy and attempted kidnapping.

In the wake of the prosecution, Governor Abdullahi Umar Ganduje vowed to assent to possible death warrant as soon as convicted.

However, the criminal trial bordered on kidnapping, attempted kidnapping, concealment, abatement, and criminal conspiracy, that was concluded within the space of six months is generating fresh concern.

The growing concern is peddling on whether or not Governor Abdullahi Umar Ganduje would actually the pledge made on signing the death warrant of the convicts, if condemned to death.

Citing cases of pending trials, those mounting concern are worried that culprits in the Hanifa’s case may finally regain freedom after years deliberate incarceration. The anxiety was based on the fact that no executive Governor has signed similar death warrant.

Reacting to the development, Attorney General and Commissioner for Justice in Kano, Musa Abdullahi Lawan allayed the public concern just as he reassured Governor Ganduje’s readiness to fulfill his promise.

Lawan reminded that though, the Nigerian Correctional Service is responsibility for issuance of the certificate, he said such provision would only be provided after the expiration of 90 days of appeal.

The Attorney General explained that  despite the conviction, the two convicts have rights to seek appeal against the trial court judgement.

Speaking with journalists, Lawan said ” The court has passed judgement sentence two of the accused to death by hanging and the Governor has promised to sign the death warrant, so we are waiting for the 90 days window period for appeal before we do the needful.

” The constitution allows and given the convicts rights of appeal about three months window period. Remember when this trial started we promised Nigeria the commitment to prosecute the case to the logical conclusion and as speedy as possible and by the will of God that happened.

In six months, the trial judge concluded the case within six months. This is commendable. So if there is appeal, we would remind the public that government is ready for the appeal at any given time. Not only that, we would make sure the trial and judgement is given equal commitment and speedy completion. I can assured the public that we are matching the trial with all sense of responsibility and seriousness”. AG noted.

He added that, “For the people raising questions on whether the Judgement would be executed or not, all I can say is the law is the law. We would wait for after the 90 days grace of appeal. If they appeal fine we would equally swing to action if they did not, as soon as the waiting period expired the governor will do the needful.