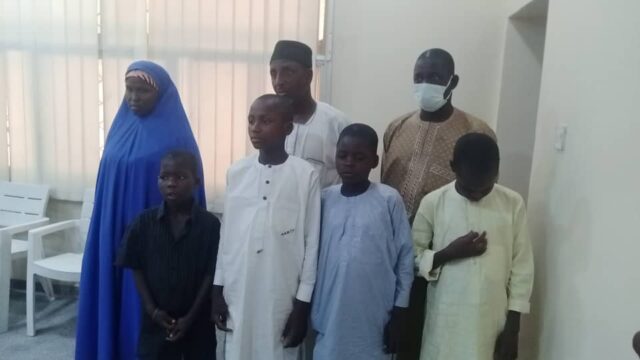 The Kano State Government has handed over four victims of child trafficking recieved from Lagos to their parents.

Speaking during the handing over ceremony, the Secretary to the Kano State Government, Alhaji Usman Alhaji said the victims were rescued by the Department of State Services, (DSS).

The SSG identified the names of the victims as Sama’ila Sabo,12, Umar Muhammmad Sani,12, Isah Yunusa,13 and Abdullahi Yahaya,14.

He pointed out that the Kano State Government is not relent in its desire to trace all missing children who were illegally abducted from their parental custody and taken to other states.

” The outcry and protest by the people that the government has neglected the matter is not true and baseless, we’re making efforts to rescue and reunite the children with their parents,”

” Kano is among the peaceful and most secured state in Nigeria, I assured to you that the achievement is not coincidence but due to the government’s commitments and deliberate efforts,” he said.

He explained that the Government has deployed technology to ensure the state is secured noting that most of the major roads covered with Close Circuit Television (CCTV) to monitor the movement of people, vehicles, animals with the view to curtailing crime and criminality in the state.

Usman Alhaji, enjoined the public to collaborate with each other with the view of ensuring Kano remained peace.

He stated that the four children were abducted while selling facemask somewhere in the state.

He called on parents to fear Allah and avoid endangering the lives of their children.

Justice Rano further stated that the committee is working tirelessly to fulfill its mandate.

He commended the Kano State Government for the confidence reposed in the Committee.