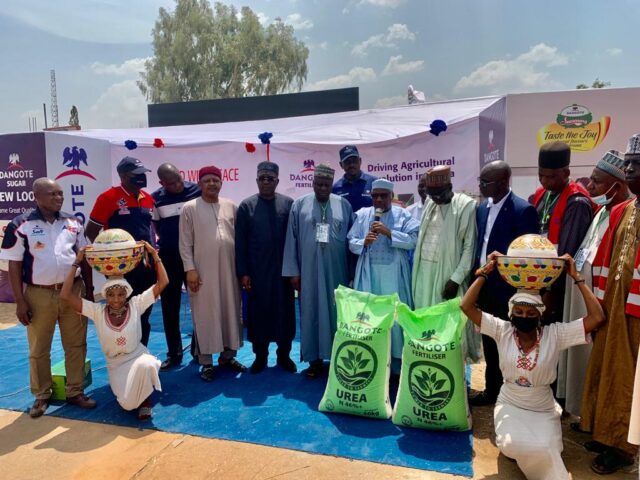 Read Also:Dangote is a major driver of peace in Nigeria &#8211; Defence Minister

This is coming against the backdrop of torrents of commendations from President Muhammadu Buhari, Governor Nasir Ahmed El-Rufai of Kaduna State and Defence Minister Bashir Salihi Magashi.

Dangote Group is one of the winners at the Fair that ended Sunday.

Mr. Ahmed also said the refinery, which is due to commence operation later in the year will also impact positively on the Nigerian economy, as it will help conserve foreign exchange and create jobs en masse.

He described the positive impact as monumental and unprecedented in the history of Nigeria.

Mr. Ahmed who was speaking weekend at the Dangote Special Day at the ongoing 43rd Kaduna International Trade Fair said the President of Dangote Group Alhaji Aliko Dangote is passionate and desirous of changing the trajectory of the African economy through industrialization.

The Group Executive Director also officially presented the Dangote Fertiliser to the Kaduna market and public, where he spoke glowingly about how the new product can help address the problems associated with agricultural yield.

He commended the organizer of the Trade Fair, the Kaduna Chamber of Commerce Industry Mines and Agriculture (KADCCIMA) for organizing yet another successful Trade Fair.

The Dangote Industries Limited is the major sponsor of the ongoing 43rd Kaduna International Trade Fair with the theme: Re-strategizing Nigerian economy for Global Competitiveness.

Speaking, President of KADCCIMA Alhaji Suleiman Aliyu described the partnership with Dangote as very important for deepening commercial activities in the country.

He said the support of the Dangote Group towards the success of the Fair cannot be quantified.

Group General Manager of the company Bello Dan-Musa said the company will not rest on its oars in gingering the economy but through its numerous philanthropic strides, being represented by its Corporate Social Responsibility schemes and the Aliko Dangote Foundation.

Why we raided Abuja hotel – NDLEA