No fewer than 6 Persons injured following a Passengers rail train accident that occurred at Obasanjo Road, near Jifatu Shopping Store, in Kano Metropolis.

In a statement by Kano State Fire Service, Public Relation Officer, Saminu Yusuf Abdullahi on Sunday said the formation of the service recieved a call at about 11:58am from one Musa Bello, who reported the incident.

He also said upon receiving the call, rescue team were immediately mobilized and arrived at the scene of the accident by 12:02pm. 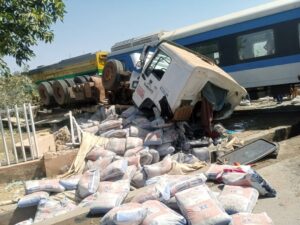 He pointed out that preliminary investigation revealed that a passenger rail train coming from Lagos to Kano collided with a trailer vehicle conveying Dangote Cement with unknown registration number, involved in the accident according to the statement were tricycle machine with registration number; Kano State Government, KAROTA Number 2153.

The statement explained that rescue team of the service were successfully rescued 6 Persons, who include 4 from the tricycle machine and 2 from the side of the mosque, closed to Jifatu Shopping Store. 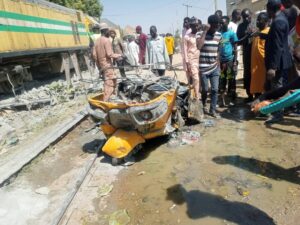 ” While Lawan Bala of about 40 years old and Jibawa Maikudi of about 32 years old from the side of the mosque.”

The statement maitained that all victims rescued alive and conveyed to Murtala Muhammmad Specialist Hospital for medical treatment.