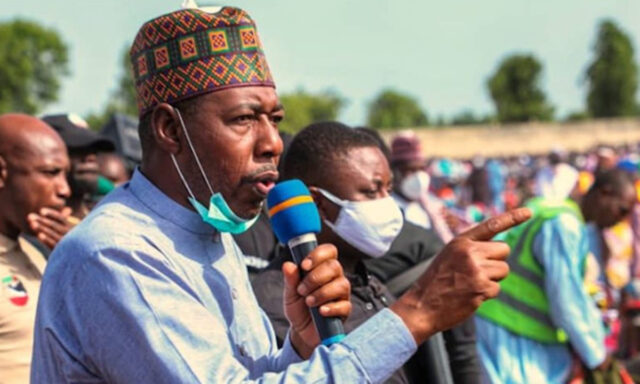 Borno state Governor Babagana Zulum has reassured the commitment of the state government to synergies with the military to bring to an end the menace of insurgency and terrorism.

The Governor made the commitment at a ceremony to celebrate the acting General officer Commanding GOC 7 Division Nigerian Army, Major General Abdulwahab Eyitato on his recent promotion to 2-star General, held at Maimalari cantonment Maiduguri.

According to Governor Zulum, Federal government alone cannot address the myriad of insecurity in the country, noting that States, local governments and citizen’s have critical role to play in achieving peace in troubled areas.

He explained that building resilience of returning communities ravaged by insurgency and providing them with means of livelihood will greatly help in ending the crisis.

Governor Babagana Zulum acknowledged the huge sacrifice the military is making in securing the country and advocated for increased salaries and allowances to enable them perform better.

Theater Commander Operation Hadin Kai Major General Christopher Musa said twenty five Generals were promoted in the Theater in 2021 which signify the sacrifice of officers and soldiers in the counter insurgency operations in the north east.

He assured to bring to an end the war on insurgency soonest.

“Your Excellency we want to assure you that is our commitment, that is our promise for this year. God with us this year we should be able them to such an extent that there will be peace and tranquillity in the entire northeast region. I know officers and soldiers are all committed and every body is focused on achieving that goal” General Musa stressed.

JUSUN Strike: NLC May Shut Down The Country Over Financial Autonomy of Judiciary