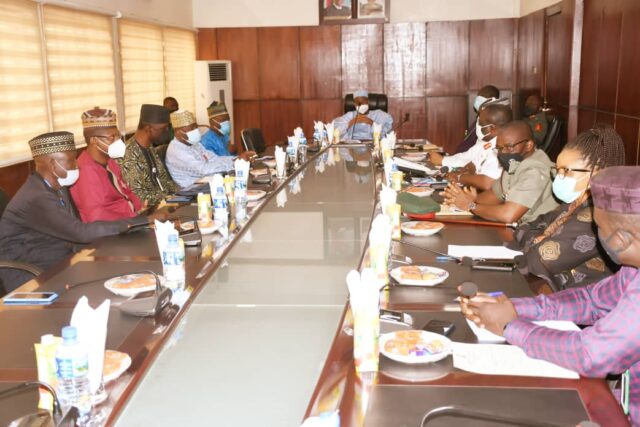 The Minister of Defence, Major General Bashir Salihi Magashi (rtd) has advised the leadership of the Coalition of Concerned Vetarans against staging further protest to press home their demands for payments of Security Debarment Allowance (SDA) and other allowances.

General Magashi stated this while addressing the Leadership of the Coalition of Concerned Veterans at a meeting held at his instance at the Ministry of Defence Headquarters, Ship House Abuja.

He said protest is not the best option and the solution to their grievances with the government especially at this period in time when the mood of the nation does not call for such action.

While assuring them of President Muhammadu Buhari’s continous commitment towards mitigating their plights, he said the recommendations by the various Committees he set up to look into their demands have undergone several exhaustive stages that will culminate into Implimentions as applicable .

The Defence Minister who is also a member of the retired Veteran Generals warned against fueling chaotic situation capable of sending wrong signals to the International Communities and called for enduring patience pointing out that their agitations are not beyond amicable resolutions .

Earlier, the Team Leader of the Six- man delegation of the leadership of the Coalition of Concerned Veterans, Commodore MF Daniel (rtd) had itemised the agitations of members that led to the January 5th peaceful protest in Abuja and other parts to include non payment of the arrears of Minimum wage and the Security Debarment Allowance (SDA).

Other demands according to retired Commodore Daniel include Salary disparities and Non capturing of some Civil War Veterans on the pay roll.

While justifying the recent protest against the backdrop of the lost of some members to lack of access to Medications and affordability to pick up medical bills, he appealed to the government to expedite action to pay up the. outstanding arreas.

The Defence Minister also accommodated the views of others in the interface.

Read Also: Over 4000 Army Recruits Pass Out After Rigorous Training

The contributors included the Convener of the protest Commander Abiodun Durowaiye who is the Spokesperson for the Coalition of the Concerned Veterans and Oamien Roy Okhdevbie.

In the same vein, the Chairman Military Pensions Board , Rear Admiral Saburi Abayomi Lawal explained the Presidential directive regarding the Implimention of the Consequential Adjustment Payments, while the Director Medical overseeing the office of the Permanent Secretary Olajide Johnson and Acting Director , Ashigye Willie John explained some technical procedure and administrative processes to be followed in Implimenting the recommendations of the Committees on SDA and the reform.

This watermelon I bought on a whim is pretty good, but I can definitely...