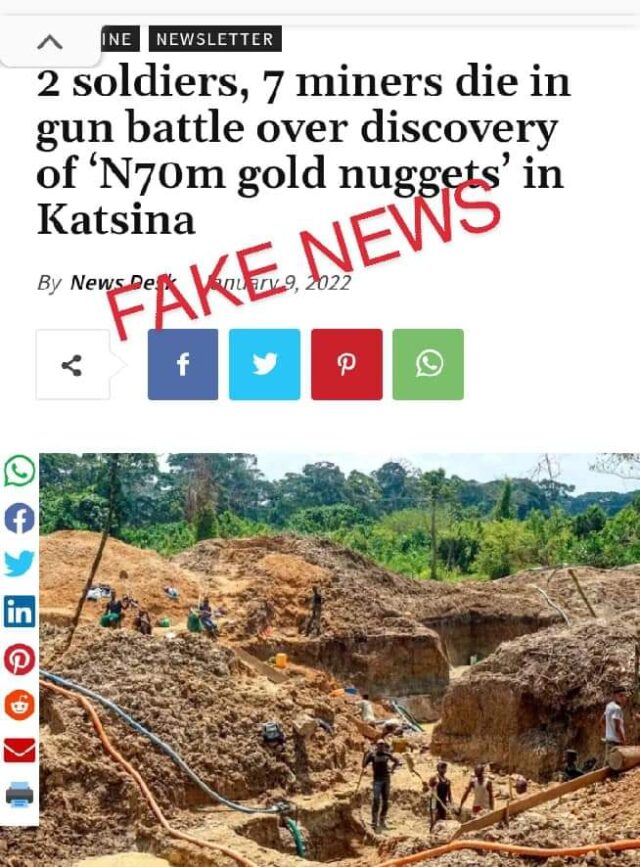 The attention of the Nigerian Army has been drawn to an online publication, alleging that 2 soldiers and 7 illegal miners were killed during a gun duel, arising from a disagreement over gold nuggets in Magama village in Jibia LGA of Katsina State.

The statement said according to the publication, the incident occurred when the soldiers turned down an initially agreed offer of 500,000 naira per pit from the miners, but afterwards, turned around to demand more money on discovering the large quantum of gold nuggets found by the illegal miners in one of the pits.

” The Nigerian Army wishes to unequivocally state that this story is baseless, unfounded, untrue and a mere figment of the writer’s imagination, aimed at tarnishing the reputation of the Nigerian Army, as no Nigerian soldier was killed, nor involved in any skirmish with illegal miners in Magama village on 5 January 2022.”

The statement further said contrary to the insinuations peddled by the online medium, Nigerian Army troops deployed in the North West were committed and engrossed in the fight against banditry and other criminalities bedeviling that region.

” They are not permitted to participate in any form of mining, whether legitimate or illegitimate.

” Aside orchestrating disrepute, Fake News as this, have the potential to dampen the morale of the fighting troops, erode their fighting will and undermine the entire operations. This is certainly not what the troops require at this critical time.”

In the statement Nigerian Army urged public to disregard the fake news as it is concocted to denigrate Nigerian Army troops, who are working tirelessly to ensure sanity and peace return to the North west region.

” We assure the general public of the unrelenting commitment of troops to decisively tackle the banditry menace in the North West. The statement added

Senate to amend laws infringing on rights of Nigerian women