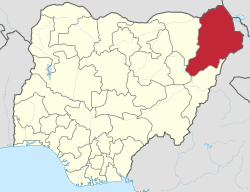 Youths from the seven local government areas that make up Bauchi Emirate on visited the palace of the Emir of Bauchi, Dr Rilwanu Suleiman Adamu.

The youths carried placards with different inscriptions and also chanted unprintable words during the protest.

Spokesperson of the youths, Nurudeen Yau Gwabba, while speaking to journalists said that they were worried over the humiliation meted on the Emirs of Bauchi and Dass by those suspected to be from Bogoro and Tafawa Balewa ocal government areas last week Friday on their way to attend a function.

Gwabba said: “We are proud of the Emir of Bauchi, moreso, he is the Chairman of the state Council of Traditional Rulers. What was done to him was a huge humiliation.

“Youths of the emirate will not just sit down, fold their arms and watch ill treatment of emirs who are fathers of all irrespective of ethno-religious inclination.

In the same vein, Coalition of Youths and Students of Bauchi State has called on Bauchi State government to initiate a judicial commission of inquiry to investigate the attack on the Emirs of Bauchi and Dass.

The Coalition, in a press statement signed by its Chairman, Usman Saleh, stated that “proactively, we cannot afford to return to those sad days of ethnic crises in Bauchi State as the 1991 Tafawa Balewa crises are still fresh in our memories. We are urging the state government to take serious action as no individual is bigger than the state.”

While receiving the youths at his palace, the Emir of Bauchi called for calm, advising the youths to control their anger and not let it get out of control to lead to reprisal attacks.

The Emir, who was represented by the Ajiyan Bauchi, Alhaji Abubakar Bala Ajiya, assured that the Emirate Council would look into their demands and make its position public in due course.

OneNote for iOS and Mac lets you attach files