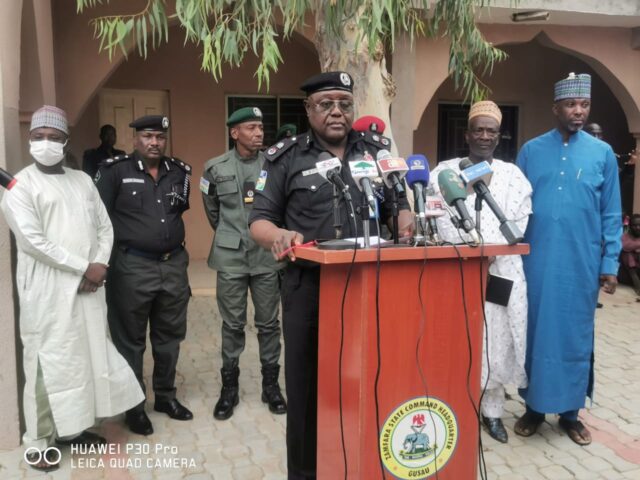 The Zamfara State Commissioner of Police Ayuba Elkana on Tuesday said that Police in collaboration with otheroint Tactical operatives in Shinkafi and Tsafe LGA,s have successfully rescued 97 kidnapped victims including 7 pregnant women, 19 babies and 16 children.

The CP Ayuba Elkana stated this during a press briefing held at the Command’s Headquarters, Gusau.

CP Elkana said the victims include, 7 pregnant women, 19 babies, ranging from 2 – 7 months old and 16 Children, ranging from 2-7 years old, stating that the Victims were rescued unconditionally.

He pointed out that police in collaboration with the Military carrying out extensive operations at various bandits’ enclaves.

The operations acccording to the commissioner have resulted to series of arrest of notorious bandits, recovery of sophisticated arms and ammunition including rescue of kidnapped victims that runs into hundreds.

CP Elkana said the breakdown number of rescued victims in each of the 2 Local Government Areas are 68 from Shinkafi and 29 from Tsafe LGA,s

” Following an extensive pressure mounted as a result of the ongoing Military operation around the camp of a notorious bandit’s kingpin known as Bello Turji that covers Shinkafi, Zurmi and Birnin Magaji Local Government areas, on 3rd January, 2022, Police Tactical operatives deployed at Shinkafi axis received an intelligence report that, some kidnapped victims were seen stranded in the bush. The Police operatives in collaboration with genuine repentant bandits and vigilante swung into action and rescued sixty eight (68) victims from the forest.”

” The victims were in captivity for over three months and they include 33 male adult, 7 male children, 3 female children and 25 women including pregnant and nursing mothers respectively. The victims held from Magarya, Maradun, Gusau of Zamfara State and Sabon Birni LGA in Sokoto State.” CP Ayuba said.

” The victims were abducted for over 60 days from three villages namely; Adarawa, Gana and Bayawuri in Rijiya District of Gusau LGA, they include 25 female including pregnant, nursing mothers and 4 male children. The victims were said to have been abducted by a Bandits’ kingpin Ado Aleru.”

” Finally I want to use this opportunity to express our appreciation to the State Government under the leadership of His Excellency Dr. Bello Muhammad Matawalle for his continuous support and assistance to the Police and other security agencies in the State.

“This kind of gesture has gone along way in making security operatives more effective and efficient in the discharge of their duties”.