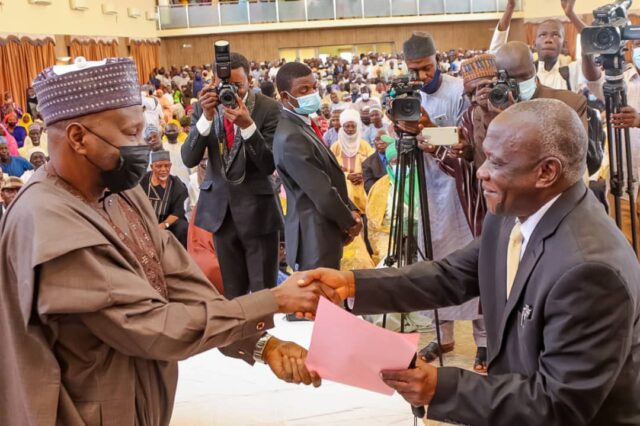 The swearing in of the jurist was sequel to the attainment of the mandatory retirement age of the former Acting Chief judge of the State, Justice Mu’azu Pindiga.

Speaking at the ceremony, Governor Muhammadu Inuwa urged the new judiciary helmsman to dispense justice to all manner of people in the State, without discrimination, fear or favour.

He assured that his administration will continue to support the Judiciary and Legislature in discharging their statutory responsibilities effectively for the overall benefit of the good people of Gombe State.

The Governor said the retirement of the State Acting Chief Judge, Justice Mu’azu Pindiga ushered-in the appointment of the most Senior High Court Judge.

The Governor noted that the citation of Justice Joseph Awak attests to the jurist’s reputable standing to superintend over the judicial arm.

He added that his dedication, experience, principles and forthrightness make Justice Joseph Awak a worthy ambassador and deserving of the exalted seat, expressing confidence in his ability to take Gombe State Judiciary to greater heights.

“My Lord, the Acting Chief Judge, with your oath taking, constitutionally it has made you head of the Judiciary, the third arm of Government in the State. As the administrative head, we urge you to dispense justice to all manner of people in the State, without discrimination, fear or favour”.

The Governor maintained that the Executive arm will continue to support the Judiciary and the Legislature as they discharge their statutory responsibilities for the overall benefit of the people of the State.

“On our part, this administration will continue to support the Judiciary and Legislature in discharging their statutory responsibilities effectively for the overall benefit of the good people of Gombe State”.

“Let me reiterate that it is the desire of this administration to have a harmonious working relationship with both the Judiciary and the Legislature; the three arms of Government have to partner for the development of our dear State and our country’s young democracy, no doubt our unity is our strength”.

Governor Inuwa Yahaya assured members of the Judiciary that his administration will continue to provide all the necessary facilities and funding that will enhance speedy administration of Justice in the State.

While congratulating the new Acting Chief Judge for assuming the headship of the Judiciary in the State, Governor Muhammadu Inuwa Yahaya equally paid tribute to the imnediate past Acting Chief Judge, Justice Mu’azu Pindiga for his service to the State.

He equally used the occasion to thank the former Chief Judge for his meritorious service to the State and Nigeria as a whole.

The Swearing-in ceremony witnessed by Supreme Court Justice, Adamu Jauro, Judge of the Court of Appeal, Hamma Barka, traditional rulers among other dignitaries.

Similarly in a statement by Ismaila Uba Misilli,
Director-General, Press Affairs Government House Gombe, Governor Muhammadu Inuwa Yahaya has sworn-in four Special Advisers to add up to the pool of political office holders in the State.

Body of stowaway discovered after flight from Lagos to Amsterdam