Admiral Gambo made this call during the decoration ceremony of twenty one senior officers elevated from the rank of Commodore to the two-star flag rank of Rear Admiral held at the new conference room of the Naval Headquarters on Thursday, 30 December 2021. 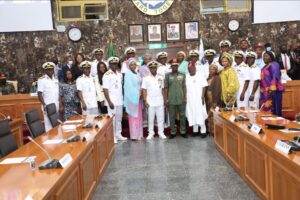 The CNS said the ceremony which had the Chief of Defence Staff General Lucky Irabor as the special guest of honour, is the crowning glory of the senior officers’ hard work, total dedication and loyalty to the Nigerian Navy and by extension the nation at large.

He added that the achievement is no mean feat and therefore, the significance of the occasion is drawn from the critical need for courageous and dynamic leadership in the armed forces.

Admiral Gambo further stated that as expected in every performance oriented organization, quality leadership in the armed forces is essential for the optimal realization of its objectives.

He added that in the profession of arms, the optimal employment of men and materiel has direct impact on operational outcomes in the theatre and national security. Therefore, despite the huge number of annual enlistments into the military, only the most dedicated and loyal rise to the very apex of the profession.

While congratulating the newly promoted officers, the CNS stated that it is the dream of every officer to reach the peak of his/her career in the Service with only a few eventually realizing the dream.

He congratulated the senior officers all for being among the selected few that made it to the rank, noting that while it takes hard work to reach a glorious height, it takes harder work to remain up there. He further urged them to justify the confidence of a proud and deserving nation bestowed on them. 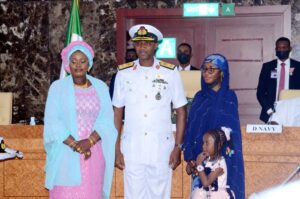 Admiral Gambo stated that the Year 2021 has witnessed significant disruption in all facets of our national lives with the armed forces now more than ever required to play more significant roles to ensure security and prosperity of our dear nation.

Consequently, the Nigerian Navy and the nation require the senior officers to be more dedicated and display unalloyed loyalty to the President, Commander-in-Chief of the Armed Forces of Nigeria in order to address the myriad of security challenges plaguing our dear nation.

Furthermore, CNS stated that ingenuity, resourcefulness and integrity will be required as senior officers of the Nigerian Navy to reposition the Service in order to discharge its constitutional role for the security and prosperity of Nigeria.

Speaking on the fight against maritime crimes, the CNS said the Navy in collaboration with other security agencies has continuously strived to protect the economic mainstay of the country through various operations to counter illegal oil bunkering and crude oil theft in the country.

He applauded the significant achievements in the fight against these maritime crimes and warned against any act of collusion with criminals or sabotage of measures emplaced to checkmate illegalities.

These he said will be met with stiff sanctions in accordance with the law of the land. 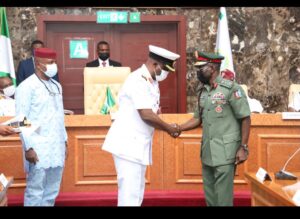 As a sign of appreciation, the CNS reaffirmed the loyalty of the entire officers, ratings and staff of the Nigerian Navy to Mr President, Commander-in-Chief of the Armed Forces, President Muhammadu Buhari, thanking him for his unrelenting support which has enabled the NN to deliver a safe, secure and stable maritime environment for the prosperity of the nation. He also added that the ceremony particularly resonates deeply with the Nigerian Navy, as it provides a special opportunity to acknowledge the enormous support availed the Service by government.

Such encouragement he said has bolstered gains in critical areas like fleet renewal, infrastructural development and manpower development which have impacted positively on operational service delivery and the nation’s strategic posture at sea.

Security: The Era of Security Rivalry is Over – Abu Tambuwal

11 Persons Die, Property Worth N10.5m Destroyed By Fire In Kano