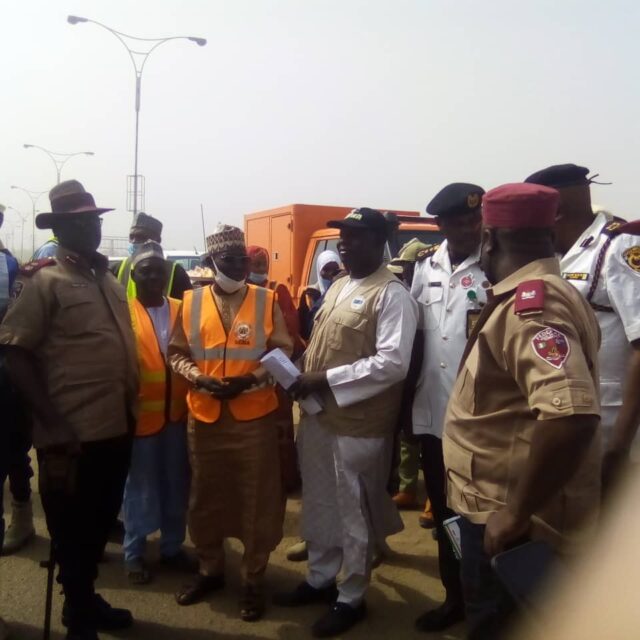 Speaking at the occasion, Director-General of NEMA, Alhaji Mustapha Habib-Ahmed, said that the move was aimed at sensitising motorists and commuters on the dangers of speeding and reckless driving.

Habib-Ahmed, who was represented by Malam Sanusi Ado of Kano Territorial Office of NEMA, said that the exercise was targeted at rallying all stakeholders to support the primary roles of FRSC of minimizing road crashes and loss of lives during and after the yuletide.

“The operation of the agency is aimed at enlightening road users, ensuring strict enforcement of traffic rules and regulations and repositioning men and equipment for response to road traffic accidents before, during and after the festive season.

“NEMA is always ready to cooperate with disaster management agencies in the state, such as FRSC, Kano State Emergency Management Agency (SEMA) and other critical stakeholders, to curb the menace of road traffic crashes,” he said.

On his part, the Sector Commander of FRSC in Kano State, Mr Zubairu Mato, urged motorists to avoid dangerous driving, overtaking, overloading as well as use of phone while driving.

According to him, the sensitisation has become necessary in order to educate drivers, passengers as well as the general public on safety procedure, especially during this festive period.

Habib-Ahmed identified speeding as the major cause of road traffic, stating that this was why the Federal Government made it mandatory for commercial drivers to install speed-limiting device on their vehicles to checkmate speeding.

Mato also called on drivers to always obey traffic rules and regulations in order to save lives and property, and also protect their vehicles.

“Our aim and objectives are to make sure we record zero incident of road traffic crashes,” he said.

Justicewatch reports that leaflets, with various inscriptions such as: “Drive with care“, “Avoid overloading“ “Do not make or receive calls while driving“ and “Know your vehicle number plates” were distributed at motor parks.

Justice watch also reports that other stakeholders, who were present at the occasion, included the Executive Secretary of SEMA, representatives of Nigerian Red Cross Society, among others.

Ganduje Condoles With Families of 17 Victims Involved in Accident

CMD to promote the standard of management education in the country, conducts free workshop...