The Kano State Commissioner of Police Sama’ila Shuaibu Dikko has warned drivers against over loading and dangerous driving to avoid loss of lives and property, ahead of this year’s Christmas and New Year Festivities.

He said the call was imperative considering of Annual festivities that are fast approaching, noting that, drivers have a greater role to play in having hitch free celebrations during the forth coming festivities.

He attributed majority of road traffic crashes to dangerous driving, drug abuse and over loading.

CP Dikko, similarly urged drivers to abide by traffic rules and regulations, saying the command will not relent in making sure that drivers follows rule and regulations.

He maintained that the role of Nigeria Police is to protect lives and property.

Ealier speaking, the Officer in Charge of Motor Traffic Department MTD Kano Command, SP Magaji Musa Majiya said from January this year to date, the Division has recorded a total number of 275 fatal accident cases with 391 deaths, while acccording to him, 522 Persons injured and properties worth million of Naira were lost as a result of road accident.

” Accident caused due to the poor attiude of drivers, riders and pedestrian who disregard traffic rules and regulations through act of over loading, unsecured loading, recklessness, negligence and taking of intoxicants among others,”

” These bad manners, prompted the need to necessarily deploy police at some designated traffic post to enforce the law and arrest offenders.” Majiya stated

He further stated that on the aspect of instilling discipline, commensurable measures were taken to ensure exhibition of professionalism, respect for human right and portraying of good image of the force were achieved

He added that within the period under review, 2 policemen were dismissed for gross misconduct and 5 others were punished acccording to the provision of the law for erring.

” About 12 Policemen, special constabularies, KAROTA, FRSC, and NSCDC personnel were arrested for various offences of providing illegal escort to private and commercial vehicles, extortion as well as operating under the guise of being MTD personnel to defraud innocent drivers. 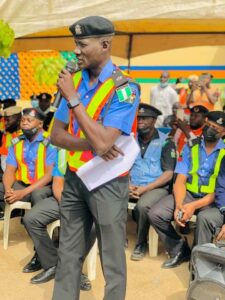 SP Majiya also informed the Commissioner that Alhaji Murtala Sule Garo Commissioner for Local Government and Chieftaincy Affairs has approved and directed Chairmen of Kano Municipal and Nassarawa LGA,s to install Solar Energy Power in the Division with a view of easing power shortage bedevilling the Division, adding that much other assistance from various stakeholders and Philanthropists in the community were gained

The OC MTD Kano stressed that in an effort to upheld and promote the Inspector General of Police Community Policing Initiatives, the Central MTD under his watch has partnered with relevant stakeholders and made so many achievements.

Many Drivers Association and other key relevant stakeholders attended the event.