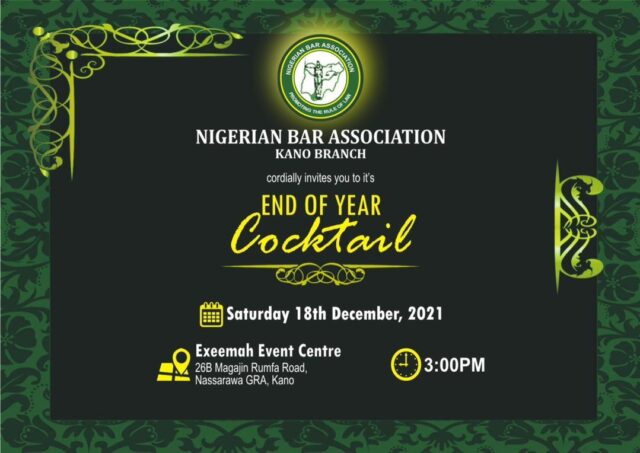 The Chairman, Nigerian Bar Association NBA, Kano Branch, Barrister Aminu Sani Gadanya has said that all necessary arrangements have been put in place to conduct the Branch End of the Year Cocktail, billed to hold on Sartuday 18th December, 2021.

Barrister Gadanya made this known to Justice Watch News.

He said it has always been the tradition of the Association to organize a program at the end of each year, saying this year is not exception.

He explained that since he assumed office, end of year cocktail was introduced, noting that each party differs from Branches.

The Chairman pointed out that the Kano Branch organized end of year cocktail last year in honour of the Senior Advocates of Nigeria elevated from Kano Bar.

He further stated that the aim of the event was to bring members of the Branch together in addition with having some fun and showing appreciation that the year round up in good health. 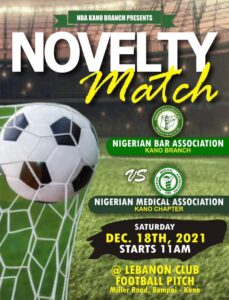 Similarly in the same vein, the Chairman stated that under his watch, the Branch has come up with sport activities, particularly football, as part of the strategy to create more interaction with other professional Associations.

” We have a strong football team to compete in any competition.”

he noted that as part of the activity of this year end of year cocktail, the NBA Kano Branch will play Novelty Match with Nigerian Medical Association NMA, Kano Chapter, to strengthen relationship between the professional Associations.

He added that the Novelty Match will takes place on Saturday, 18th December, 2021 at 11am at Lebanon Club Pitch, Miller Road, Bompai Kano.

NDLEA arrests mother of three with 100 wraps of cocaine tucked in her private...