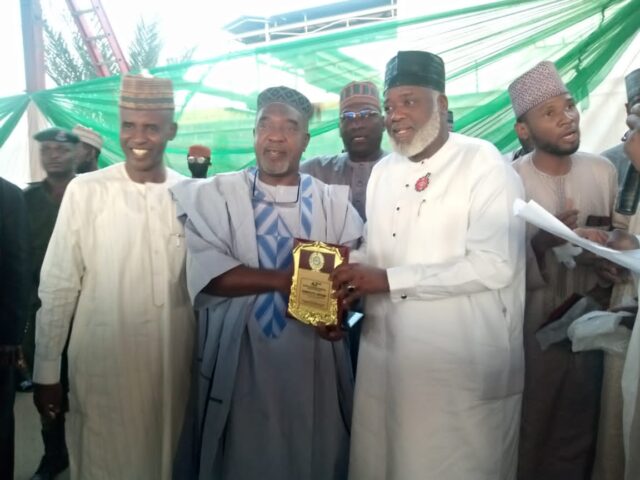 The Dangote Industries Limited has been described as the most supportive company.

Presenting an award to the company at the weekend, the chairman Committee on Trade Fair of the Kano State Chamber of Commerce Industry Mines and Agriculture (KACCIMA) Alhaji Uba Tanko Mijinyawa said the company has been consistent and supportive in its philanthropic activities.

He said the nature of support by the company cannot be quantified, adding that the award was well deserved.

The Dangote Group is the major sponsor of the just concluded 42nd Kano International Trade Fair.

Earlier, the Governor Abdullahi Ganduje, Emir of Kano Alhaji Ado Bayero and the Ugandan High Commissioner to Nigeria Ambassador Nelson Ocheger had hailed the company’s President Aliko Dangote for his industrialization drive on the African continent.

The Director General of KACCIMA had spoken glowingly of the company, adding “We appreciate his (Dangote) efforts and support to the socioeconomic growth of the African continent.”

He added that eight countries participated in this year’s Trade Fair. They are: India, Pakistan, South Africa, Singapore, Senegal, Egypt, Mali and Cameroon.

Representative of the company at the Trade Fair, Alhaji Abdulsalam Waya said the company has recorded giant strides in the area of Corporate Social Responsibility.

According to Mr. Waya some of the philanthropic works it has carried out in Kano State include: state-of-the-art Surgical and Diagnostic Centre within the premises of Murtala Mohammed Specialist Hospital, Kano.

Others, he said, are: construction of a Business School complex within the premises of Bayero University, Kano comprising of auditoriums, lecture theatres, offices, classes and library; as well as the construction of hostels and provision of other facilities at the Kano State University of Science & Technology, Wudil.

The company is also the largest employer of labour in Nigeria outside the government.

Some Strange Moves Towards Getting Me – Comrade Sa’Id Dakata