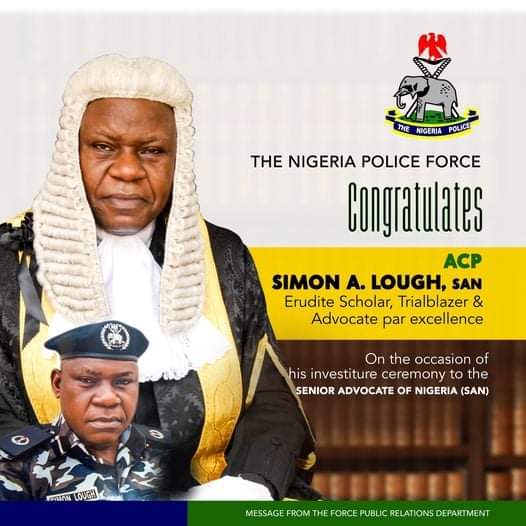 Assistant Commissioner of Police, ACP Simon Asamber Lough, the Head of Chambers, Legal Section of the Nigeria Police Force (NPF) has been conferred with the prestigious and covetous rank of Senior Advocate of Nigeria (SAN).

The elevation of the Officer is on the heels of his outstanding contribution to the development of law in Nigeria, in addition to his enviable feats in the legal profession.

A statement by Frank Mba, Force PPRO said Lough was sworn in on the, 8th December, 2021 by the Chief Justice of Nigeria following recommendations and approval by the Legal Practitioners’ Privileges Committee (LPPC).

” ACP Simon Lough, a Police prosecutor par excellence, was appointed as a cadet officer (ASP) into the service of the Nigeria Police Force in the year 2000. Twenty-one (21) years down the line in Public Service, ACP Lough has served in various departments of the Force including the legal section and held national positions on implementing legal policies for the country.”

” Notable amongst his contributions and achievements is his record of securing over one hundred convictions of cases of armed robbery, murder, rape, financial crimes, amongst others.

Mba also said ACP Simon was successfully defended several high-profile cases and got thirty-three (33) judgments at the Court of Appeal and seven (7) at the Supreme Court of Nigeria.

” These achievements have earned him several commendations and awards within and outside Nigeria.

With his investiture to the rank of SAN, he is the first serving member of the NPF and any other uniform agency in Nigeria to attain the feat in the legal profession.’

The statement pointed out that the Inspector General of Police, IGP Usman Alkali Baba, while congratulating the legal luminary and cop on his investiture to the prestigious rank of Senior Advocate of Nigeria, noted that the achievement is a testament to his exemplary hard work, dedication, tenacity and affirmation to the age long maxim that ‘hard work truly pays’.

The IGP further charged the Officer to consider the accomplishment as a platform that should propel him towards the fulfillment of other lofty goals and more professional services to the NPF in particular and the Nation in general.