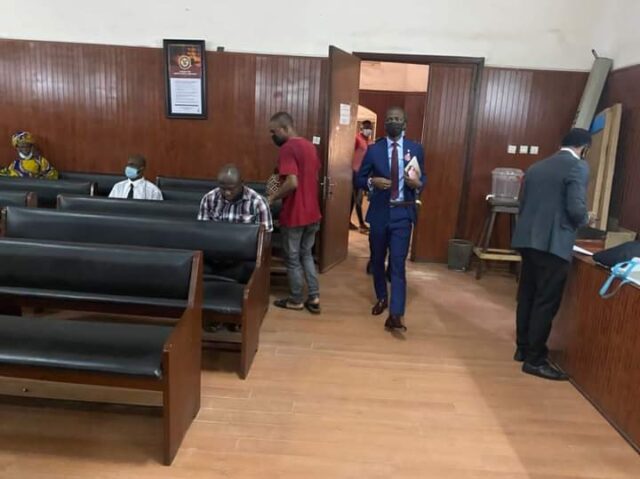 The ongoing trial of Abubakar Ali Peters and his company, Nadabo Energy Limited, for an alleged N1.4billion fraud before Justice C.A. Balogun of the Lagos State High Court sitting in Ikeja could not continue, owing to the absence of the defence counsel in court.

Abubakar and his company, Nababo Energy Limited, who were arraigned on December 10, 2012, are being prosecuted by the Economic and Financial Crimes Commission, EFCC, for allegedly using forged documents to obtain the sum of N1, 464,961,978.24 from the Federal Government as oil subsidy, after allegedly inflating the quantity of Premium Motor Spirit, PMS, purportedly imported and supplied by the company.

They pleaded “not guilty” to the charges.

At the last sitting on November 16, 2021, Justice Balogun had admitted, in evidence against the defendants, the letters of investigation activities written by the EFCC to Petrocam Trading PYT Limited and the Corporate Affairs Commission, CAC, as well as the responses from the two agencies as exhibits O4, O5 and O51.

The documents were tendered by the prosecuting counsel, S.K. Atteh, through the Executive Chairman, EFCC, Abdulrasheed Bawa, who is the fifth prosecution witness and the lead investigator.

Bawa, who was expected to continue with his examination-in-chief today, had told the Court that the correspondences, which were thoroughly studied in the course of investigation, further exposed several activities embarked upon to defraud the Federal Government in fuel subsidy funds.

“We studied the responses from Petrocam and found out that, contrary to the claim of the defendant that Ashland Energy SA was the supplier, it was Petrocam Trading PYT Limited that supplied about 4,500MT equivalent to about 6.5million litres of PMS as against the claim of about 14,000MT of PMS equivalent to about 19.8million litres purportedly supplied by the defendant,” he said.

However, when the case resumed Tuesday, there was no counsel for the defence, stalling further testimony of the witness.

When asked by the Court where his lawyer was, the defendant simply said: “He told me that his flight from Kaduna got cancelled.”

Atteh, however, urged the Court to take note of the fact that “We have had similar excuses in the past.”

The trial judge also observed that the defence counsel gave no prior notice of his absence to either the Court or the prosecution.

“You better know what you are doing,” the Judge said to the defendant, noting that the witness was also in Court, “so why should the lawyer delay us.”