Kano State Agency for Control of AIDS sensitized Kannywood Stakeholders on the portrayal of HIV/AIDS Issues in films production to end stigma and discrimination among people living with HIV/AIDS.

The Director-General of The Agency Dr Sabitu Y. Shu’aibu Shanono Said the Agency Observed the efforts by the Kannywood Industry for producing films that educate the public about the pandemic of HIV/AIDS, And there is a need for the Agency to update their knowledge to meet the current trend of fighting the virus globally.

Dr Sabitu Shanono said the rate of HIV/AIDS has reduced by 80% and the target is to stop the new infection and concentrate on the treatment of the infected people.

He Solicits the support of Kannywood stakeholders to assist the Agency in educating the public using the new knowledge they acquired in the seminar.

Speaking at the Occasion the Executive Secretary, Kano State Censorship Board, Alhaji Isma’il Na’Abba Afakallah, commended KSACA for organising this educative sensitization and urged the participants to portray the knowledge in practice.

Also speaking Professor Abdullah Uba Adamu from Faculty of Communication Bayero University Kano and the Former Vice-Chancellor National Open University of Nigeria, suggest that the Agency should support the production of a short film that carries the message and use in social media such as Youtube, WhatsApp, Facebook to adequately inform the public and equally suggest the Use writers and singers to succeed in the campaign, against HIV/AIDS. 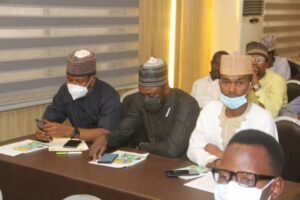 Similarly acccording to the statement by Aminu Bello Sani, Public Relations Officer,
KSACA , explained that the event which held at Tahir Guest palace attended by reputable people from Kannywood Industry and presentation from Dr Ashir Tukur Inuwa of Mass Communication and Dr Usman Bashir of Community Medicine all from Bayero University.