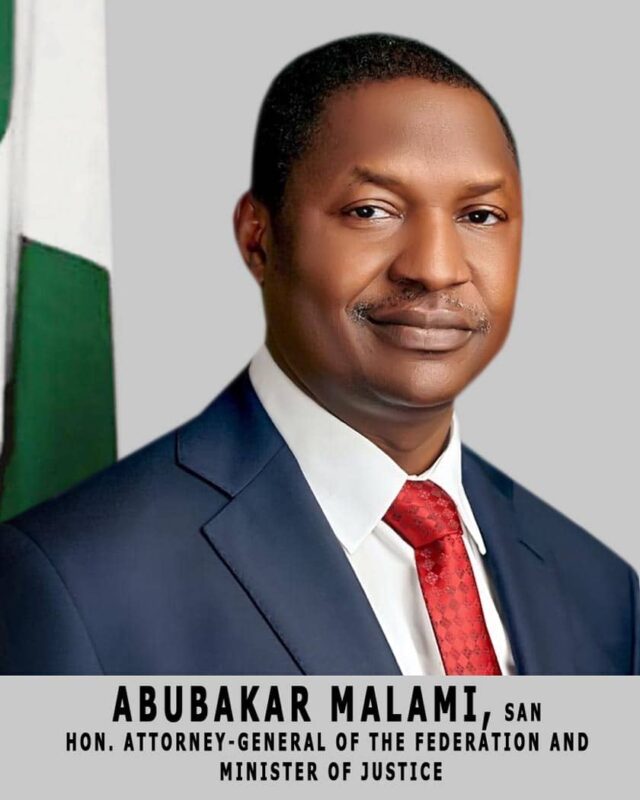 The Attorney General of the Federation and Minister of Justice Abubakar Malami (SAN) has commended the leadership of National Drug Law Enforcement Agency (NDLEA) for the renewed vigour and unflinching commitment in the fight against drug abuse in the country.

The AGF, represented by the Special Assistant to the President on Financial Crimes and Compliance, Office of the Attorney General of the Federation and Minister of Justice, Mr.Biodun Aikomo he said events of the past 11 months, including the launch of War Against Drug Abuse ( WADA) Campaign and the impact yielding Offensive Action of NDLEA were attestation to resolve to tackle the drug abuse in the country.

Mr Malami said NDCMP 2021- 2025 lunched was strategic to the planned effort to change the drug abuse and trafficking narrative of Nigeria.

” The significance of this occasion cannot be over- emphasized given the strategic and critical importance of the document in addressing the complex issues of production, cultivation, trafficking, sales and abuse of psychotropic drugs and illicit substances.

He noted that the National Drug Control Master Plan was central to the country’s approach to tackling the illicit drug conundrum with the overall goal of improved health and security for all Nigerians.

” menace of drug abuse and trafficking is a global problem and Nigeria is not immune to this scourge. Our society is grappling with some of the consequences of the illicit drug menace, including its negative impact on public health, the corrosion of the social fabric and the attendant pernicious effects on the economy.
Since the release of the findings of the National Drug Use Survey 2018, we have had to sit up and come to terms with the grim reality of drug abuse in this country. Having a drug user population of 14.3 million people (14.4%), between 15 and 64 years of age, of which one in every four drug users is female while 376,000 people are high-risk drug users, is a wake-up call for urgent action.”

“We cannot afford to trivialise the situation, especially with incontrovertible evidence that buttresses the fact that Nigeria has moved from a transit country to a consumer country where all sorts of illicit drugs are trafficked in and out of our territories.
The picture is more frightening when you consider that Cannabis Sativa is being cultivated illegally in large quantities and large shipments of cocaine and heroin are coming in from South America and South-East Asia, with the production of Methamphetamine gathering momentum in the country. He disclosed.

Abubakar Malami maintained that the present administration attaches priority to clamping down on drug trafficking and eradicating drug abuse in society.

The Minister pointed out that as a blueprint, this was the fourth strategic document, of a structured and coordinated approach to drug control, developed by Nigeria since 1999.

He explained that the consistent development of the National Drug Control Master Plan (NDCMP) speaks volumes about Nigerias commitment to continuity in her institutional framework for response to the evolving complex drug situation.

” The NDCMP 2021-2025, developed after extensive consultations with key stakeholders at the state and national levels, provides the critically needed focus in Nigerias drug control efforts, by setting out activities and measurable targets for the various government agencies involved in drug control, thereby buttressing the need for inclusive, multifaceted and concerted approach in our drug control efforts.”

” I strongly believe that the rigorous implementation of the NDCMP 2021-2025 will bring the desired result in our calculated effort to exert control over the menace and overcome the challenges of the drug problem and related organized crimes in Nigeria.

” I urge all stakeholders responsible for reducing the supply of and the demand for narcotic drugs and psychotropic substances in Nigeria to place a high premium on the implementation of the provisions of this important document. Malami stated

He reminded the significance of collective responsibility to actualise the action points and achieve the goals of NDCMP 2021-2025.

“May I conclude by expressing appreciation to the European Union and the United Nations Office on Drugs and Crime, UNODC, for their roles in funding and facilitating the development of this strategic document. Also, the immeasurable contributions of the Inter-Ministerial Committee Members in the development of this document is highly appreciated”. Attorney General of the Federation further said.