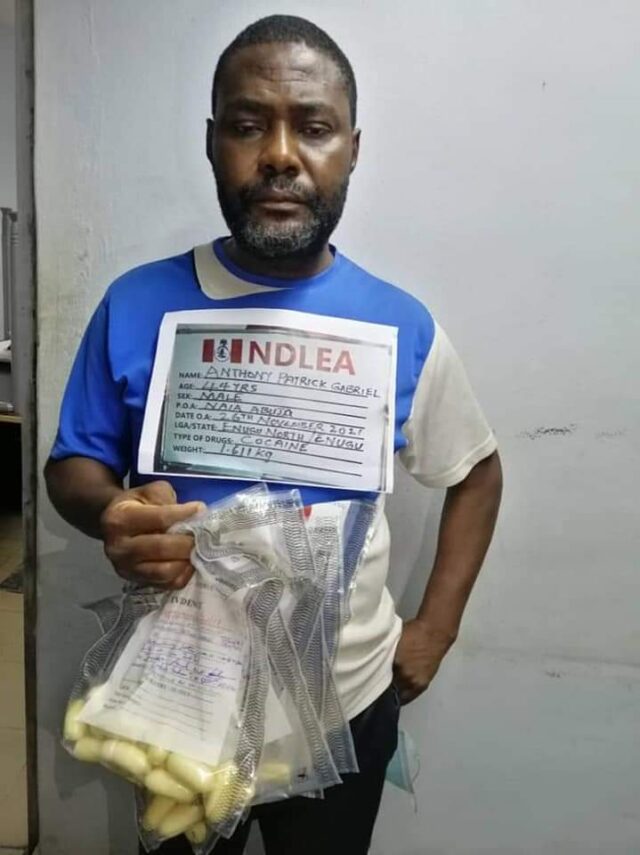 A 44-year-old father of three, Gabriel Anthony Patrick has been arrested by operatives of the National Drug Law Enforcement Agency, NDLEA, at the Nnamdi Azikiwe International Airport, NAIA, Abuja for ingesting 96 pellets of cocaine, which he excreted in the custody of the Agency.

In a statement by Femi Babafemi, Director, Media and Advocacy of the Agency said a native of Nike in Enugu North Local Government Area of Enugu state, Gabriel was arrested on Friday 26th November during an outward clearance of Turkish Airline at the boarding screening area of the airport enroute Abuja-Istanbul-Madrid.

Babafemi said the suspect had had travelled to Germany in 1996 for two years on asylum after which he relocated to Spain in 1999 where he currently holds a residence permit and works as a driver in a food manufacturing company. He claimed he came into Nigeria on 17th November to sell cloths and car spare parts he shipped to Lagos earlier.

He however said he couldnt sell his consignments, which cost him 4,000 Euros excluding the cost of shipment because they were priced below the cost price at Ladipo market in Lagos and he needed to travel back to Spain to resume work after the expiration of his annual leave.

This, according to the statement led him to accept an offer to traffic the drug for which he would be paid 1,500 Euros when he successfully delivers the consignment to someone in Spain.

He claimed he left Lagos for Enugu to see his family members, and then travelled on 25th Nov to Onitsha, Anambra state where he was picked from Upper Iweka park at night and taken to a house where he was given the 96 pellets of cocaine to ingest before leaving for Abuja to board his flight to Madrid the following day.

The statement also said In the same vein, NDLEA operatives at the Murtala Muhammed International Airport, MMIA, Lagos have arrested one Okorie Godwin Onyeribe over his attempt to export 21.85kg of cannabis concealed in foodstuff to London, UK. He was nabbed at the NAHCO export shed of the airport on Friday 3rd Dec.

” The other three, all AUN undergraduate students: Ekene Asher; Daniel Alkali and Emmanuel Smooth, were arrested at 11:30pm on Thursday 2nd Dec. after taking delivery of Loud, a strong variant of cannabis ordered by Ekene for them to smoke.

Two suspects arrested with the drugs; Matthew Donuwe and Friday Nborgwu claimed they have spent a month on the road from Ondo state hoping to deliver the consignment in Mubi, Adamawa before they were arrested at Girei in Girei LGA of the State.

In Oyo state, operatives intercepted 608.40kg of Cannabis sativa concealed in a black Toyota Sequoia SUV with registration number Lagos MUS 553 GN and parked around toll gate area, Ibadan-Ife expressway, Egbeda LGA, Ibadan on Friday 3rd Dec. The following day, operatives equally seized 85.90kg cannabis recovered from the boot of a Nissan Primera car, Lagos FJK890DZ and in one of the rooms of an apartment where search operation was carried out at Adegbayi area, Alakia, Egbeda LGA.

” Those arrested in connection with the seizure include:
Benson Uzoka, 46; Kafayat Adeyemi Uzoka, 40; Ndidi Uzoka, 39 and Christopher Uzoka, 42.”

The Director explained that while the duo of Praise Emmanuel and Aminu Aliyu were arrested with 228kg cannabis in Kano, operatives in Taraba stormed cannabis farms in Changso village, Kurmi LGA, located on the mountains between Nigeria and Cameroon, evacuated 364kg of the illicit drug and set the rest on fire. Equally, ThankGod Danladi who has just finished a jail term in October was arrested on Wednesday 1st December with 67kg cannabis in another raid in the state.

It further said that in Niger state, operatives intercepted a commercial bus with 215kg cannabis concealed in a false bottom and side door of the bus, along Mokwa – Jebba road.

” Two suspects; a driver and his conductor arrested claimed they loaded the consignment in Ogere, Ogun State and were heading to Sokoto as their final destination.

It stated that in Delta state, a lady Tina Ujene was arrested in Ibusa with 1.1kg cannabis while a follow raid on her suppliers home led to the recovery of 54.7kg of the same substance. Different quantities of Cannabis, Methamphetamine, Cocaine, Heroin, Diazepam and Exol-5 were seized in raids at AP- Eleme and Garki, Oil Mill areas of Port Harcourt, as well as Lewe and Kadiri in Gokana LGA, Rivers state on Friday 3rd Dec.
The statement pointed out that In Ondo state, a 72-year-old Emmanuel Akanbi was arrested at Odofin camp, Uso, Owo LGA with 2,050kg cannabis.

He charged them along with their colleagues in other commands to constantly focus on raising the bar of their achievements until the last gram of illicit drug is taken away from every community in Nigeria.