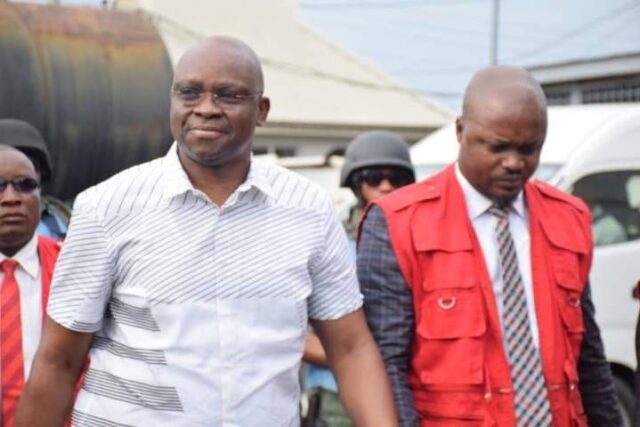 The Economic and Financial Crimes Commission, EFCC, Lagos Command had, on Tuesday, July 2, 2019, re-arraigned Fayose on an 11-count charge bordering on money laundering and stealing to the tune of N6.9bn( Six Billion Nine Hundred Naira).

Fayose was arraigned alongside one of his firms, Spotless Investment Limited, for the alleged fraud.

The defendants had first been arraigned on October 22, 2018 before Justice Mojisola Olatoregun.

At the resumed sitting today, Tolulope, who was led in evidence by the counsel to the prosecution, Rotimi Jacobs, SAN, told the court that Agbele bought four charlets from her company, Still Earth Limited, between March and July, 2015.

The witness, who is an in-house counsel for Still Earth Limited, also told the court that the company deals in real estate and also renovates properties to meet the needs and expected standards of their clients.

According to her, Agbele had put a call to the company, sometime between March and July 2015, to ask if they had properties for sale.

She said: “Incidentally, we have properties for sale. We discussed Mr. Agbele’s availability to come for inspection. He came sometime in March, 2015 to inspect the property and requested two charlets of three-bedroom and four-bedroom respectively and paid N575 million and some fractions for the property.

“He also approached us to register the Deed of Assignment in the name of JJ Technical Service.”

However, when Jacobs sought to tender the Deed of Assignment as an exhibit before the court, counsel to the defendant, Ola Olanipekun, SAN, objected to its admissibility.

When asked how the money was paid, Tolulope told the court that the sum of N800 million was deposited by De Privateer Limited into the account of Still Earth Ltd, adding that there was a cash lodgment of the sum of N209 million from one Taofeek on Agbele’s instruction.

“Also, another N40 million was received from De Privateer Limited.

The case has been adjourned to Thursday, December 2, 2022

‘Pastor’ arrested with 3 drums of Mkpuru Mmiri in Akwa Ibom