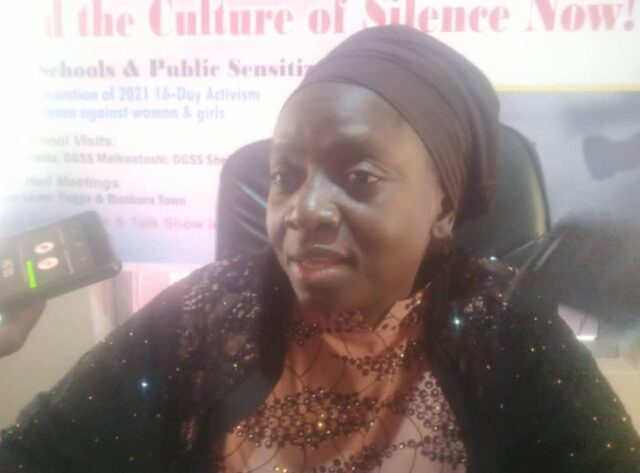 The Waraka Sexual Assault Referral Centre (SARC) has called on the Kano State Government to establish special courts to deliberate on cases related to Gender Based Violence for speedy dispensation of justice.

Barrister Sanusi Aliyu Yakasai, Chairman, SARC Steering Committee in kano made the assertion during a press conference, as part of the activities to mark this year’s 16 Days of Activism for the Elimination of Violence Against Women and Girls held in Nigeria Union of Journalists, Kano Council’s Secretariat.

” is not that that we are not satisfied but establishing or assigning of special courts to solely hear matters on GBV will enhence speedy trial of justice.”

The Chairman also said Courts were overwhelmed by large number of cases, stressing the significance of establishing special courts for GBV.

He equally said like many other states of the federation, Kano State has experienced an alarming rate of rape and sexual assault cases in the recent past.

The Chairman maintained that since inception the center has recorded over 4000 and still counting cases of sexual violence of mostly against young children blow the age of 13 years.

Barrister Yakasai traced the historical background of Waraka-SARC in Kano.

” Kano State Justice Sector Reform Team established the NARAKA Sexual Assault ReferralCenter (SARC) with technical assistance from Justice for All (J4A), a DFID funded intervention in the year 2016, and the establishment of Waraka SARC in Kano State has contributed to the efective management of Sexual Gender Based Violence (SGBV) cases and prosecution of perpetrators but more work is still required” he said.

Also Read: Man 50, Jailed to 14 years for commiting rape against minor in Kano

” For the Commemoration of 16 days of activism for Elimination of Gender Based Violence by WARAKA-SARC, Kano State GBV Response Team, Free legal Aid Service Providers in Partnership with Rule of Law and Anti-Corruption Program (RoLAC).”

The Chairman maintained that Waraka staff have enjoyed several trainings and are well equipped to provide quality services as well as creating awareness on SGBV, management of cases and prosecution of perpetrators,

” With its ever growing population which has made Kano state a cosmopolitan, thereby
increasing the tendencies of exposing the most vulnerable members of the society
comprising of women and girls at risk of being abused. For example, Dala LGA which is the
most populous LGA in the state, in recent times has recorded high rate of incidences of violence against children especially rape cases.

” This is closely followed by women in Kumbotso, Nassarawa, Tarauni, and other metropolitan LGA,s of the state.

He lamented that impunity, silence, stigma have allowed violence against women to escalate to pandemic proportions.

Acccording to the Barrister Yakasai, Annually the global community marked the 25th November, as the International Day for the
Elimination of Violence against Women and girls, till the 10th December of every year, as Human Rights Day, and 16 Days of Activism against Gender-Based Violence
Campaign which is considered the best time to galvanize action to end violence against
Women and girls around the world.

The steering committee chairman stated that advocates understand that while the names and contexts may differ across geographic locations, women and girls everywhere are experiencing extensive abuse and their stories need to be brought to light.

” This is the reason for this global Campaign and advocacies and the theme for this year is: “Orange the World”

He therefore noted that, In light with the above, Kano State GBV response team and Sexual Assault Referral
Center WARAKA-SARC in partnership with Association of Free Legal Aid Service providers supported by Rule of Law and Anti-Corruption Program (RoLAC) has planned to mark this
year’s International days for the 16 days of activism for eradication of violence against
women and girls, this meeting is particularly aimed at officially declaring the events and
other series of activities including many public sensitization and media campaign publically
open and to whieh for a successful conduct of all lined of programs for this year 2021.

” Therefore, the activities includes Town Hall Meetings, where discussion, presentation will be held, on how to strengthen SGBV response mechanism, the participants will also be drowned from community actors.
Media engagement programs such as this one, as well as other live radio/TV phone in
programs will be conducted, where experts and stakeholders will interact with members of the
public on how they can access GBV support, services as well as inform them on the
processes to prevent the occurrence of GBV incidences, that will be carryout in at least
radio station in the state.
Some schools will be visited where GBV clubs were established meetings and students
sensitization activities will be conducted on the overview of GBV how get support on any
GBV incidence while encourage them to continue been good ambassadors of their states and communities”.

My work only allows Internet Explorer, so I have to manually

Police Parade 39 suspects of various crimes across the country