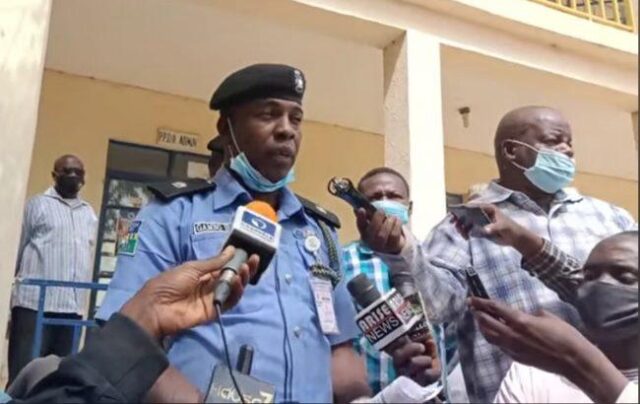 Operatives of Nigeria Police, in Katsina State Command have succeeded in arresting One Jamilu Idris, aged 39yrs of Sabon-Fegi, Yankara village, Faskari LGA of the state, an Islamic cleric, who alleged to have masterminded the kidnapping of his causing, one Umar Farouk Kabir, aged 4yrs.

SP Isah said that on 09th October, 2021, at about 1430hrs, the Suspects went to the house of his uncle, one Kabir Abdullahi at Funtua, who was not at home and when his son Umar Farouk Kabir came out to see who was asking after his father, he recognized the suspect, who later deceptively gave the little boy a Viju drink and abducted him to Dutsen-Alhaji, Abuja.

The Spokesman also said that the suspect called the father (his uncle) through his GSM, changed his voice so that he cannot recognize him and threatened that he has kidnapped his son.

He stated that during the cause of Investigation, Jamilu confessed to have kidnapped and demanded the payment of five million naira (N5,000,000:00K) ransom which the father said he can only afford to pay him the sum of five hundred thousand naira only (N500,000:00K).

” Consequently, the Complainant reported the matter to the police and in the course of investigation suspect was traced and arrested and confessed to the commission of the offence and Investigation is ongoing”

SP Gambo similarly said police in Katsina has arrested Members of Vigilante who alleged to have turn out to be suspected Armed robbers.

” On 19th October 2021 at about 0900hrs, the Command succeeded in arresting the duo of Jafaru Suleiman, ‘M’, aged 45yrs and Mustapha Usman, ‘M’, aged 30yrs of Yargoje village, Kankara LGA of Katsina state, members of local vigilante group, who turn out to be suspected armed robbers.

” The facts of this case was that, on 17th October, 2021 at about 1730hrs, suspects attacked one Aminu Tukur, ‘M’, aged 25yrs of Rijiyar Gamji village, Kankara LGA, who was passing through Yargoje village to attend a naming ceremony with machetes and robbed him of money the sum of fifteen thousand naira (N15,000:00K) and other valuables after inflicting serious injuries on his body.

” Suspects abandoned the victim in full of his own blood thinking that they have killed him. In the course of investigation suspects confessed to the commission of the offence.

He added that Investigation is ongoing.

The Spokesman added that the Command within the period under review has successfully arrested informants and Fuel Suppliers to Bandits.

DISCLAIMER: Army is not constructing ruga settlement in any part of south east