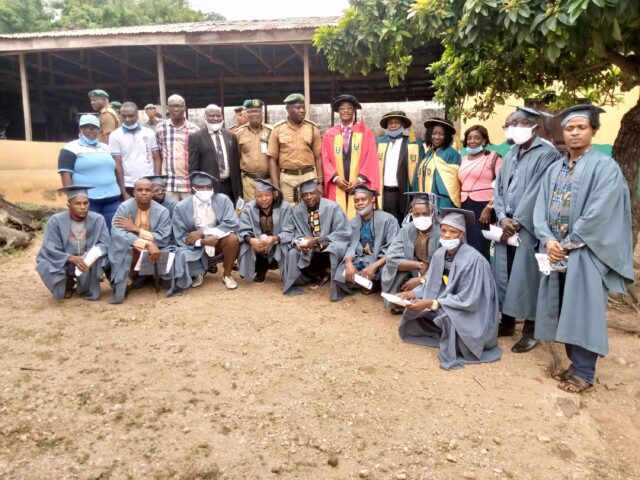 There was wide jubilation in the Medium Security Custodial Centre, Ibara Ogun State as 11 Inmates in the facility were matriculated into the National Open University of Nigeria (NOUN) to study various courses such as Business Administration, Political Science, Criminology and Security Studies, Peace and Conflict Resolution and Public Administration.

The Vice Chancellor, Prof. Olufemi Peters in his address, charged the inmates to be good ambassadors of NOUN in their conduct.

The VC who was represented by Dr. Segun Adenuga, the Director Abeokuta Study Center, assured the inmates of NOUN’s commitment to making their study seamless and peaceful. 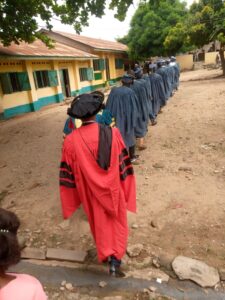 He urged them to have thirst for knowledge and be a generation that will restore Africa’s pride to help change the continent after their release from custody.

The VC expressed the gratitude of the NOUN to NCoS for its cooperation and specially commended the effort of ASC I Awesu Abdulhakeem the welfare and Education desk officer of the Custodial Center for his commitment to ensuring the inmates have seamless studies.

Earlier in his welcome address, the Controller General of Corrections Haliru Nababa, who was represented by the Controller of Corrections, Ogun State Command Abdurasheed Alimi, implored the matriculating students and other inmate’s to take advantage of the opportunity given by NOUN to add value to their lives.
He reiterated that the occasion underscores the core mandate of the Nigerian Correctional Service (NCoS) which is to reform and rehabilitate those in its care and subsequently reintegrate them back to the society. 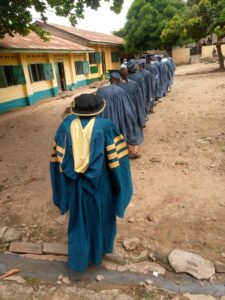 He informed that the Service has continued to deliver on its mandate through a plethora of academic and vocational skills acquisition programmes, as well as psychosocial support for inmates.

Haliru noted that over 3,000 inmates are currently undergoing various programmes with the NOUN and other Higher institutions that are in partnership with the Service.

He expressed his appreciation to President Muhammadu Buhari, for the rare commitment to life-changing programmes for offenders in custody.

While appreciating the effort of development partners in this worthy course, the CG used the opportunity to call on members of the public to look beyond the old broken life of offenders and consider assisting them to settle peacefully in the society as this is the only way to break the circle of reoffending.

The Corrections boss assures of his irrevocable commitment to the safety and comprehensive reformation of the offenders in his care.

In a statement issued by SC Victor Oyeleke
Ogun State Command PRO said This is the third matriculation at the Custodial Center, under the auspices of NOUN. 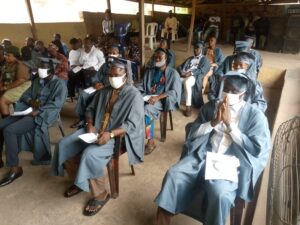 The statement said the ceremony was witnessed by the Director of Mass Literary, Alhaji Mikail Lawal who represented the Commissioner for Education, Ogun State, Prof Abayomi Arigbabu.

The total number of inmates of Ibara Custodial Center studying various degree programmes at the NOUN is now Sixty one (61) including two Masters Degree students.