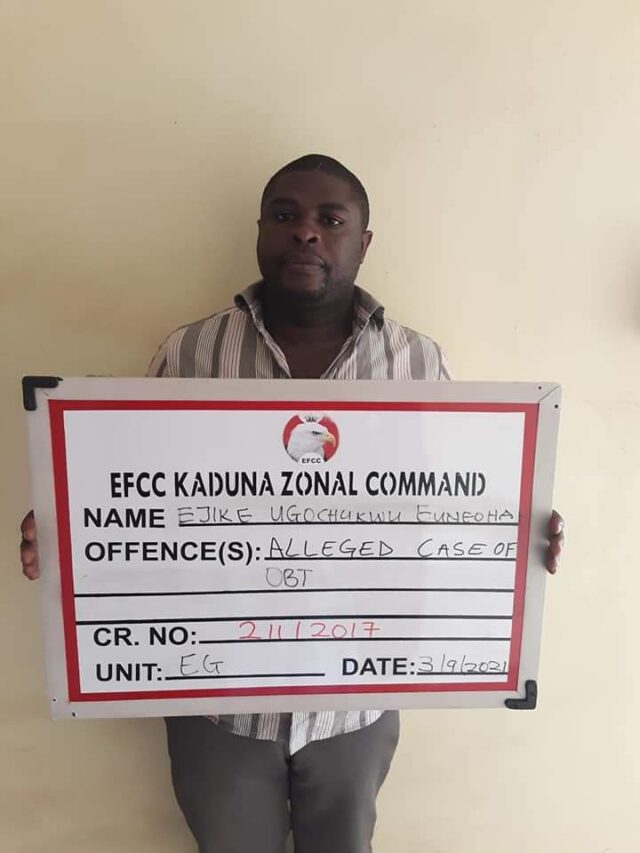 The Kaduna Zonal Command of the Economic and Financial Crimes Commission, EFCC has arraigned one Ejike Chinedu Euneoha before Justice Hannatu A.L Balogun on one count charge bordering on obtaining money by false pretence.

Ejike’s trouble started when one Utazi Romanus Ejiofor petitioned the Command, alleging that sometime in 2014, he informed the defendant of his intention to start importing goods and requested if he could link him up with a contact in China. Ejike offered to link him with an in-law residing in China and even called the said in-law who spoke with the petitioner on phone.

After the conversation, the petitioner paid the so-called China-based contact N4, 278,500.00 (Four Million Two Hundred and Seventy Eight Thousand, Five Hundred Naira) through Ejike for the supply of tiles and other building materials.Building of Corner shops at K/Wambai Market: Court Grants Leave To Defendants

The petitioner further alleged that the defendant also collected 10 bundles of zinc valued at N105, 000, 00 in lieu of money and a further N350, 000 to buy a Golf Car, which he also converted to his personal use.

All efforts to receive the goods or be refunded proved abortive.

The one count charge reads, “That you, Ejike Chinedu Euneoha, (M) sometimes in 2014 in Kaduna within the Kaduna Judicial Division of the High Court being entrusted with property to wit; the sum of N4,278,500.00(Four Million Two Hundred and Seventy Eight Thousand, Five Hundred Naira) only by one Utazi Romanus Ejiofor for the purchase of tiles and other building materials, did dishonestly convert to your own use the said money in violation of legal contract which you made in regard to the said sum and you thereby committed an offence contrary to Section 311 of the Penal Code law of Kaduna state and Punishable Section 312 of the same Law.

He pleaded ‘not guilty’ to the charge when it was read to him.

Justice Balogun granted bail to the defendant in the sum of N2.5m and two sureties in like sum. One of the sureties must be a Grade Level 10 officer in the civil service.

Press Freedom Day: Media Must be Sensitive to what we’re going through – Buhari