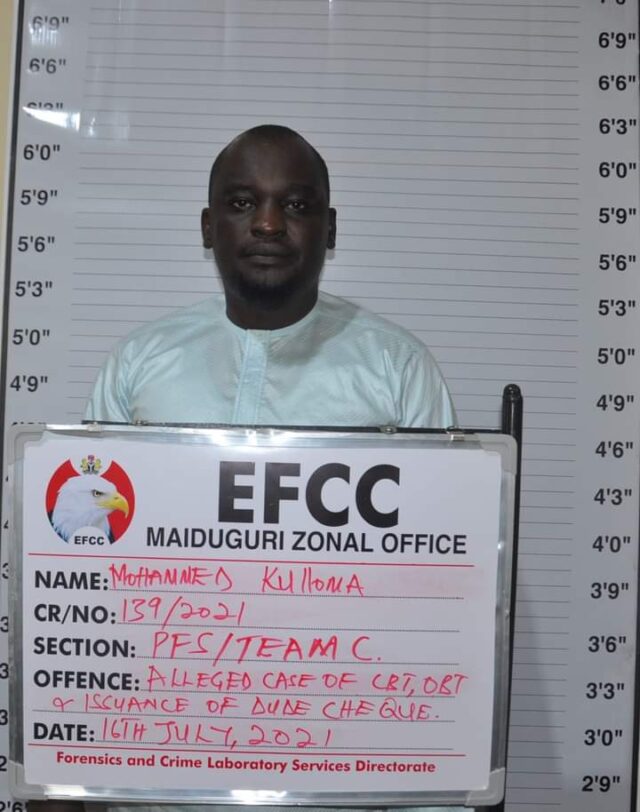 The trial of one Muhammed Abdullahi Kulloma before Justice Aisha Kumaliya of the Borno State High Court, Maiduguri commenced on Monday, September 13, 2021 with the Economic and Financial Crimes Commission, EFCC, Maiduguri Zonal Command presenting two witnesses against the defendant.

The defendant allegedly deceived one Modu Mustapha Tijjani, Managing Director of Gumalti Nigeria Limited and obtained the said sum in tranches of N27million, N13million and N500,000.00 through his personal and company’s accounts, on the guise of financing a contract for the supply of locally made cooking stoves awarded to him by a Non-Governmental Organisation, Mercy Corps.

The one count charge reads: “That you, Muhammad Abdullahi Kulloma being the Chief Executive Officer of Mbuta Criterion Nigeria Ltd and alter ego of Mbuta Criterion Ltd, a company registered in Nigeria, sometimes in 2020 at Maiduguri, Borno State within the jurisdiction of this Honourable Court with intent to defraud obtained the sum of N40,500,000.00 (Forty Million Five Hundred Thousand Naira) only from Modu Mustapha Tijjani, the Managing Director of Gumalti Nigeria Limited via your personal account No. 0236531326 and your corporate account No. 0458028956 with account name Mbuta Criterion Nigeria Limited both domiciled with GTB Plc under the false pretence that the said sum represent payment for the execution of a purported contract for the supply of locally fabricated cooking stoves made with clay knapsack sprayers awarded by a Non-Governmental Organisation (NGO) , Mercy Corps, which you knew to be false and thereby committed an offence contrary to Section 1(1) (b) of the Advance Fee Fraud and Other Fraud Related Offences Act, 2006 and Punishable under Section 1(3) of the same Act.”

The defendant pleaded ‘not guilty’ when the charge was read to him.

At the resumed hearing today, first prosecution witness, Modu Mustapha Tijjani while being led in evidence by the prosecution counsel, Mukhtar Ali Ahmed, told the court that the first defendant informed his manager, Sadiq A. Goni, that he was awarded a contract by Mercy Corp worth N40.5million and he wanted the complainant to finance the contract which was obliged.

PW1 testified that, “On the 4th of December, 2020, my brother Bulama Mustapha Tijjani transferred the sum of N27million to the personal account of the defendant domiciled at Guaranty Trust Bank Plc after the defendant approached my manager for an assistance to finance a contract and he promised to pay back after thirty days. Afterwards, when Kulloma was contacted, he informed us that the contract is ongoing and he needed additional money to finish up the contract.

“Given his words, the sum of N13million was transferred to the defendant account domiciled with Guaranty Trust Bank on the 28th day of February, 2020 and another N500,000 was later transferred to Kulloma with an undertaking to pay all the monies including the accumulated profit but subsequently he reneged on his promise.”

“Consequently, I confronted Kulloma with my findings from the Mercy Corps, and he admitted being paid and promised to pay in a month’s time. Later, he issued me a post dated cheque of N30million with Polaris Bank and an undated cheque of N14.4million with Zenith Bank which I later found out were dud cheques’ ‘, PW1 said.

PW2, Sadiq A. Goni, Manager of Gumalti Store Nigeria Limited, corroborated the evidence given by the PW1.

In his testimony, PW2 said, “I was introduced to the defendant by one of my neighbours, Mallam Usman Ado; who said the defendant was a vendor executing contracts with NGOs, that he was awarded a contract by Mercy Corps.

“I met with my Managing Director, Tijjani and informed him about the contract awarded to the defendant and a purported Purchase Order was presented to Tijjani by the defendant in my presence where he requested for financing, which Tijjani obliged.”

Justice Kumaliya, after listening to the testimonies of the witnesses adjourned the matter till September 29, 2021 for continuation of trial.

The defendant has been remanded in the correctional facility since the day of arraignment.