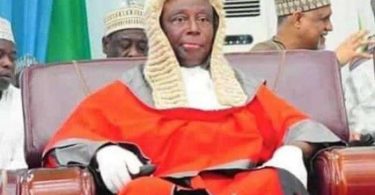 It is one’s major ambition in life to gain an appreciable acceptance and unrivalled recognition in the hall of fame in the field where one he or she has chosen to excel. where such a recognition became explicit and widely acknowledged and revered to high heavens, one would have no iota of doubt in life that his ambition in life is undoubtedly fulfilled.

For those who had remarkably excelled and prospered in their chosen field, they have an abiding obligation to prove to everyone that walking a tight rope and crossing the rubicon is inescapably associated with the task of gaining recognition in the much pronounced hall of fame and reverence.

It is indisputable fact that, in every profession such as journalism, law and other notable challenging profession, there are intractable obstacles one has to surmount before reaching the top echelon of success.

The Legal or Judicial profession for example, entails one’s commitment, dedication, industriousness and high level sacrifice, to enable one to stand tall among his peers in the legal lexicon, with one’s pedigree standing as a litmus test.

If the above postulation is anything to go by, Justice Nuraddeen Sagir Umar, the incumbent Chief judge of Kano State, can be aptly said to be one born with a golden spoon and lighted his candle in both ends. Born on 8th March, 1958 at Rimin Kira Quarters in Kano City.

Justice Nuraddeen, like a typical Hausa/Fulani child of Kano indigene, he started primary education at Local Education Authority ( LEA) in Yakasai, Kano City from 1963 and acquired his primary leaving certificate in 1970. He proceeded to Rimi Collage Kaduna from 1970 and sat for West African School Certificate (WASC/GCE) in June, 1975 where he passed out with flying colors.

The Quintessential Chief Judge of Kano State, Justice Nuraddeen Sagir started his higher level education in School of Basic Studies A.B.U Zaria where he had his one Year Preliminary University Education in 1976 to 1977.

His Journey to become Jurist started in 1977 after he secured admission to study Law in the prestigious Ahmadu Bello University Zaria (ABU) where he acquired Bachelor of Laws ( LLB) on 3rd July, 1980.

The Honourable Chief Judge, attended Nigerian Law School, Lagos in 1980 and he was Call to Bar in 1981.

In his quest to further his educational carrier, Justice Umar had his Master of Laws (LLM) at Ahmadu Bello University on 25th May, 1989.

The Jurist, was appointed as Chairman, Kano State Rent Tribunal, Gidan Murtala from 1986 to 1988. After Proving his prowess in adjudication, Justice Nuraddeen was later appointed High Court Judge, Kano State of Justice from 1991 to date more than 3 decades ago.

From 1995 to 1997, the Legal Luminary served as Chairman, Miscellaneous Offences Tribunal, Kano/State Zone.

He was a member of Governorship and Legislative House, Election Petition Tribunal, Lagos State in June 1998.

He was also a member, National Assembly, Governorship and Legislative Houses Election Tribunal, Nasarawa State in the year 2000.

Coming back to Kano, the Honourable Chief Judge, Justice Nuraddeen Sagir Umar was a Chairman, Kano State Local Government, Election Tribunal a position he held in 2003.

The Legal Pundit had attended series of Judicial workshops, Trainings and Conferences related to Adjudication and Adminstration in Judicial cycle, this include National Judicial Institute (NJI), held at Sokoto, October 1994. National Workshop for Judges and Prosecuter on Child Rights Family Courts and Trafficking in Persons, held at Kaduna. NJI Workshop on Refugee Law for Judges and Khadis Abuja. 2013. All Nigerian Judges Conference Centre Abuja, November 1997, and NJI Training Workshop on Alternative Dispute Resolution ( ADR) and Arbitration for Judges, 2002.

The Judicial Scholar has not only limited himself to Bench alone but extended his mastery and prowess into Research and Writing, he is the Author of ‘ Law of Continental Shelf with Reference to Nigeria 1998’.

The Chief Judge likes Reading and Walking and he is happily married with Children.