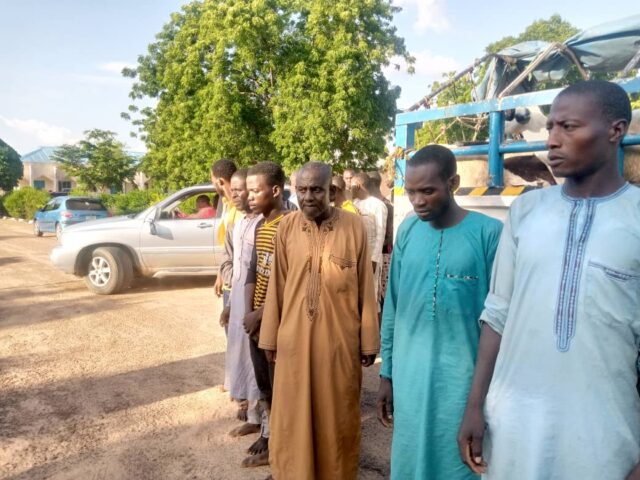 Katsina state Command of Nigeria Police says it has successfully arrested one Auwalu Aliyu popularly known as Dankalli who alleged to have been in the police wanted list.

He also said the suspect an indigene of Batsari LGA of Katsina state and a fugitive has been place on the wanted list of Batsari Community and Police for allegedly committing various crimes bondering on banditry.

” Nemesis caught up with the suspect when he was accosted in a motor park, at kurfi LGA trying to board a vehicle.
The SP Isah stated that, In the course of investigation, 6 SIM cards of various GSM network providers, a complete set of vigilante Uniform and ID card were recovered in his possession during police search. Noting that investigation is ongoing.

He further stated that the command has
arrested a suspected informants, Middlemen to bandits and recovered 80 suspected Rustled cows

His words: “On the 7th September, 2021 at about 1700hrs, the Command succeeded in arresting (1) Rabi’u Usman ‘m’ aged 35yrs (2) Sa’idu Shu’aibu ‘m’ aged 38yrs (3) Awwalu Abdullah ‘m’ aged 40yrs all of Wanzamai village, Tsafe LGA of Zamfara state, flouting the containment order emplaced by the state Government by conveying eighty (80) suspected rustled animals comprising Sheep and Goats in a Canter, Lorry with REG. NO. ABS 647 XA driven by one Aliyu Abubakar, ‘m’, aged 32yrs of Kurmin Mashi, Kaduna State. In the course of investigation, suspects confessed to the commission of the offence and further stated that they were conveying the animals to Abuja. Investigation ongoing.”

” On the 6th September, 2021 at about 0330hrs, the command succeeded in arresting the duo Umar Sabi’u ‘m’ aged 24yrs of Filin Canada Quarters, Katsina and Ibrahim Sabi’u, ‘m’, aged 17yrs of Sabuwar Unguwa Quarters, Katsina. Nemesis caught up with the suspects, when they vandalized a transformer at Birji village, Kaita LGA and stole away some cable wires. In the course of investigation, suspects confessed to the commission of the offence. Investigation ongoing.”

In the same vein, SP Gambo stated that on the 30th August, 2021 at about 2000hrs, one Shafi’u Hassan, ‘m’, a staff of Power Holding Company of Nigeria (PHCN) reported at Dandume Divisional Police Headquarters that while on routine patrol inspecting PHCN installations at Arawa village, Dandume, he noticed that electric cables connecting Arawa feeder transformer, measuring about 450 meters, valued six hundred and sixteen thousand naira (N616,000.00) were vandalized.

The Katsina Command’s Spokesperson added that 2 suspected Informers and Suppliers of Fuel to Bandits were arrested the statement reads : On the 7th September, 2021 at about 1100hrs, officers of the 17 Brigade Army Headquarters, Natsinta Barracks, while on patrol along Yan Tumaki to Danmusa road arrested the duo Isiya Abdullahi ‘m’ aged 40 years of Yan Tumaki village, Danmusa LGA, Katsina and Usman Mamman, ‘m’, aged 30yrs of Dan Ali village, Danmusa LGA of Katsina state. Nemesis caught up with the suspects when they were accosted while conveying two (2) drums of diesel inside a motor vehicle, Golf III wagon, green in colour with registration number VA 417 KJA, suspected to be a supply to the bandits in the bush. Investigation ongoing.