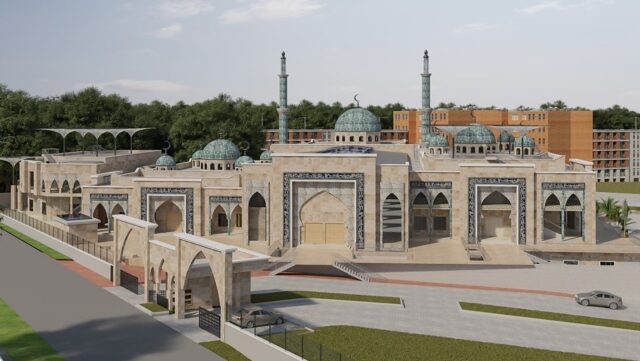 A Mosque can literally be defined as “Sajada” (in Arabic) which means “prostrate” where mosque is categorized as the place for “sujuud” (Masjid). A Mosque or Masjid is therefore referred to as a place for worship.
On the other hand, a communal mosque or “Jam’i” type is closest to the idea of “Community Mosque”. The Arabic word for University, “Jaami’a” was derived from “Jam’i” (Community Mosque) and this confirms that from the beginning of Islamic history, the mosque is actually an educational institution.
Muslims then developed Islamic civilization based on education they got in mosques. The mosque as a learning centre serves as a catalyst to the development of the surrounding area within the aspects of educational, physical, spiritual and psychological needs.
Whence, mosques became the symbol of an Ummah (Community) that is significantly built in monumental scale and not isolated from the urban fabric. A mosque is a place that strengthens the kinship of Muslims and a Centre that portrays sustainable design values that can accommodate the various needs of the society.

The above historical and contemporary functions of a mosque were highlighted in the Speech of the Board of Trustees Chairman of the International Centre for Islamic Culture and Education, ICICE, Abuja, Malam Ibrahim Suleiman, at the Foundation Laying and Appeal Fund Launch of Al-Noor Masjid Expansion Project on Saturday April 24, 2021, at the Mosque premises in Wuse II, Abuja.
It can further be deduced in summary that the general role of a sustainable communal mosque includes a place for prayers for all as history and Hadith (sayings of the Prophet PBUH) show that Believers used to meet for the collective prayers five times a day at the Mosque of the Prophet (PBUH) in Madinah that was also opened for everybody, men and women, old and young, Arabs and non-Arabs.
Apart from prayers, the mosque is also a Place for Socialization, for “Da’awah” (Islamic Call), for Celebration and Festivities (Wedding, Eids etc). It is also a Place for Meetings, Medical Care and importantly for Education.

Dr Abdulfatah Adeyemi, the ICICE Director of Arts, Counseling and Culture, who succinctly explained other characteristics of a masjid maintained that evidences show that the Mosque of the Prophet (PBUH) was a community place full of activities including skills acquisition, teachings of religious and general knowledge, development of intellectual abilities, financial education, as well as interpersonal skills and communication skills”.
Conscious of these unquantifiable beneficial services offered by a Communal Mosque to the public, the ICICE that is the custodian of the Al-Noor Masjid, decided to transform the Masjid to “more than a mosque” by expanding it to accommodate the ever increasing number of worshippers of more than 10,000 at a time that troop nowadays for the five daily prayers, the Weekly (Friday) and the two Eid (yearly) Prayers.
The ICICE established in 2012 (together with the Mosque by a Visionary Leader and Philanthropist Alhaji Aminu Baba Kusa) focuses on Inter-faith dialogue, training in Islamic Finance, Industry, Science of Qur’an and Arabic language courses, Islamic cultural heritage and Historical exhibition, Art and Craft, Skills development to the less privileged youth, Poverty eradication, Children summer schools, Scholarship programs and many other human and capacity development services.
Some of the activities and services of the Centre including the Mosque are offered and conducted indoors, hence the proposed Al-Noor Masjid expansion project will also include Centres of learning for the teaching of Islamic and western education to the young and old, facilities for socio-economic empowerment of the community as well as religious activities to improve character and increase the strength of morality and “Taqwa” (Fear of Allah SWT) of the attendees.
An expansive Ablution Bay for both Male and Female worshippers and ritual bath-houses will be built in the new complex while the Tahfiz and Tilawa classes, Conference Halls and Auditorium and the LLibrary will move out of the ICICE Administrative Block to the new Al-Noor Mosque.
Realising the importance of a Communal Mosque in the unity of the Ummah and as a centre of learning as well as the bounties of Allah (SWT) derived from donating a Charity for His sake, the Director General and Chief Executive of the ICICE, Dr Kabir Kabo Usman said the Management with the approval of the Board of Trustees resolved in May 2018 to solicit for donations from individuals and organisations through an Appeal Fund to be launched for the Al-Noor Masjid Expansion Project.

The purpose was to give other members of the Muslim community a sense of belonging by contributing no matter big or small so as to benefit from such a religious cause. In a presentation to a Congregation at the mosque on 19th November, 2020, the Director General emphasized the Hadith that says “Whoever builds a Mosque for the sake of Allah, Allah will build for him a house in Paradise” (Sahih al-Bukhari 439, Sahih Muslim 533).
To actualize the concept of an expanded Masjid that will be “more than a mosque”, Project Monitoring, Quality Assurance, Project Management and Appeal Fund Raising Committees were set up and the following Milestones were recorded:

Consequent the approval by the ICICE Board of Trustees of the concept for the desirability of an expanded Al-Noor Masjid that will be a magnificent “mosque and more”, information about the project and notice soliciting for donations were first made public on 25th May 2018 through various means of communication while Architects and Consultant Project Managers were engaged on 30th May and 18th June, 2018 respectively. The Board of Trustees met on 25th September, 2020 and approved contract for the project to LUBELLL Nigeria Limited that was awarded on 7th October, 2020 at the cost of N3.150b.
After several consultations among the various committees, the Board of Trustees of the ICICE and the Al-Noor Masjid Advisory Committee with his eminence, the Sultan of Sokoto, Alhaji Muhammadu Sa’ad Abubakar III, CFR., Saturday, April 24th, 2021 (13th Ramadan 1442) was agreed as the date for the Groundbreaking launch of the Appeal Fund and the Foundation Laying of the Al-Noor Masjid Expansion Project, at the Mosque premises, IBB Way, Wuse II, Abuja.
Doubting Thomases about the success of the planned two-in-one event were amazed as the turn out of the invitees and the enthusiastic members of the public was awesome.
The Special Guest of Honor, the Sultan of Sokoto who was bereaved on the eve of the launch was represented by the Emir of Keffi, Alhaji Shehu Usman Chindo Yamusa III, and unveiled the plaque to commemorate the foundation laying.
Among others who attended the twin events were members of the National Assembly, current and former members of the Federal Executive Council, Captains of Industry, Muslim Women Associations, the Academia, Representatives of various Islamic organizations and Islamic Scholars from far and near including the Religious Adviser of Al-Huda Satellite TV, Sheikh Muhammad Salah and the Grand Mufti of Zimbabwe, Sheikh Isma’il Menk who was elated with the turn out and the impressive donations described the proposed Al-Noor Masjid Expansion Project as “more than a mosque”.
Chairman of the Groundbreaking ceremony and Chairman FCT Committee of Imams Initiative, Dr Tajuddeen Muhammad Bello Adigun, re-echoed Sheikh Menk’s comments and said with a multi-purpose centre and other facilities, Al-Noor Masjid could be “more than a mosque”.
Donations in cash, cheques and pledges were made and about N1.3bn was realized on the spot. These excluded the over N360million collected as donations before the launch.
However, as construction work progresses and the company is being paid according the terms of the contract, the chunk of the pledges have not yet been redeemed but BUA Cement Company that pledged to donate the whole Cement required for the build of the project has as at August ending supplied Six Trailer Loads of Cement totaling 5,400 Bags while two anonymous persons have donated 250 and 50 Bags of Cement respectively. BUA Company has also requested for the work schedule (Timetable) of the construction work to enable them include the Cement requirements for the project into their production schedule.
An anonymous person who pledged to supply the Carpets, Light Fittings, Public Address System, CCTV (Closed-circuit television) and Lifts (Elevators) last week presented some samples of Designer Carpets to the Management to Choose.

The ICICE Management and the Al-Noor Masjid Advisory Committee are making efforts to follow up and get all pledged donations of over N1bn redeemed while willing members of the public and organizations can still donate through: JA’IZ BANK PLC Account No. 0003675276 AL-NOOR Mosque Expansion Project and TAJ BANK LTD Account No. 0000108097 ICICE Mosque Expansion Project.

Abdulkadir Ahmed Ibrahim, a Fellow of the Nigerian Guild of Editors (FNGE) is the Editor in Chief of Al-Noor News Journal and Special Assistant (Media and Publicity) to the Director General of the ICICE, Wuse II, Abuja

Dan Orbih: Why PDP must elect him to save party

Marwa: Birthday tribute to an enigma

Alleged Killing of Student By Sodier in Bayelsa, Under Investigation – Nigerian Army