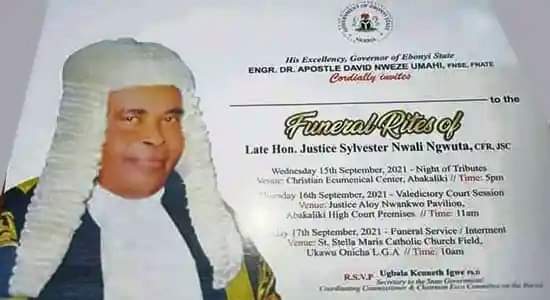 A flyer made available to Journalists shows that the 15th of September has been fixed for a night of tributes and the venue is Christian Ecumenical Centre Abakaliki and is to hold by 5 pm.

On the 16th of September, there will be a valedictory court session at Justice Aloy Nwankwo Pavilion, Abakaliki High Court Premises by 11 am while the funeral service/interment will come up on September 17, 2021, at St. Stella Maria Catholic Church Field Ukawu Onicha LGA by 8 am.

Recalls that the funeral arrangements were initially slated to hold from the 28th to 30th April 2021 was postponed indefinitely by the Ebonyi State Government and the family of the late Supreme Court Justice.

The state government noted that the decision to postpone the burial was due to security reasons.

Bandits Denounces Banditry and Surrendered GMPG to Police in Katsina.

Thinklab – Building a startup team to fix science and government